What do you know about Chad Kelly’s knee injury?

17 Nov What do you know about Chad Kelly’s knee injury? 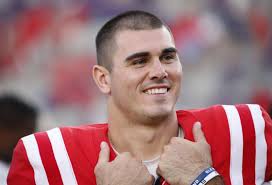 The Ole Miss Rebels won the game against Georgia South last week, but they lost something even more important. It was a worse case scenario for Rebel Fans when quarterback Chad Kelly sustained a season ending injury to his knee. Kelly now suffers from a torn ACL and a torn lateral meniscus. He is scheduled to have surgery soon.

ACL injuries are no joke! The ACL is the tough band of tissue that joins the thigh and the shin bone together. It runs diagonally through the knee giving it support and stability. A torn ACL usually occurs when the knee is bent backward, twisted or bent from side to side. It can also occur if the foot is placed firmly on the ground and the slightly bent knee is struck by a sudden force. The latter seems to be what happened to Kelly. Coach Hugh Freeze said “somebody rolled into” Kelly’s knee as he stepped into a throw.

If that wasn’t horrible enough, Kelly also tore his lateral meniscus. A meniscus is the tough rubbery piece of cartilage between the thigh and the shin bone. It acts as a shock absorber for the knee and helps it balance the body’s weight. Just like the ACL, a torn meniscus can be caused by a force striking the knee. While minor tears can be treated using the RICE method and anti-inflammatories like ibuprofen, severe tears like Kelly’s require corrective surgery to heal.

It’s safe to say that Chad Kelly won’t be back on the field anytime soon. After treatment, he’s going to have to go through rehabilitation. When treating ACL and meniscus tears, rehabilitation is important especially after surgery. If not treated, it may lead to an ACL deficiency which will lead to more knee problems in the future.

Have you suffered a knee injury? Does your knees still give you trouble? We can show you how to strengthen your knees to prevent further injury. If you want to learn more please call us at 662-282-4949. In the meanwhile, what did you think of Chad Kelly’s knee injury? What does it mean for the Ole Miss Rebels now that he’s out for the rest of the season? Let us know in the comments!